Viral video sensation Karen Waldrup has released an 11-song project that she says is the album she’s always wanted to make. 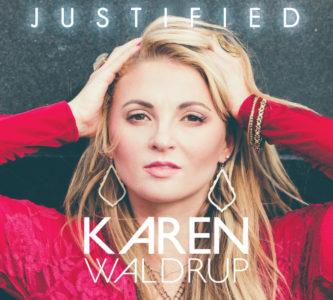 Justified was produced by award-winning producer Garth Fundis, who has credits with Trisha Yearwood, Alabama, Keith Whitley and others. That alone makes this album worth a listen.

According to a release, Waldrup wrote or co-wrote 9 of the 11 tracks with Nashville friends and fellow songwriters including Julia Cole, Anthony Smith, Donnie Skaggs, Ed Hill, Brian Kolb and others.

On the album is her version of Lee Ann Womack’s smash hit “I Hope You Dance”, which is the song that sent her skyrocketing through the internet.

“Getting to work with uniquely talented artists is truly a joy and Karen Waldrup is definitely one of those,” Fundis said.  “It’s a rare occasion you meet someone who also possesses the charm, work ethic and sheer determination necessary to see her dreams come true. She is one of those people too.  Don’t tell her something can’t be done, she’ll prove you wrong every time.”