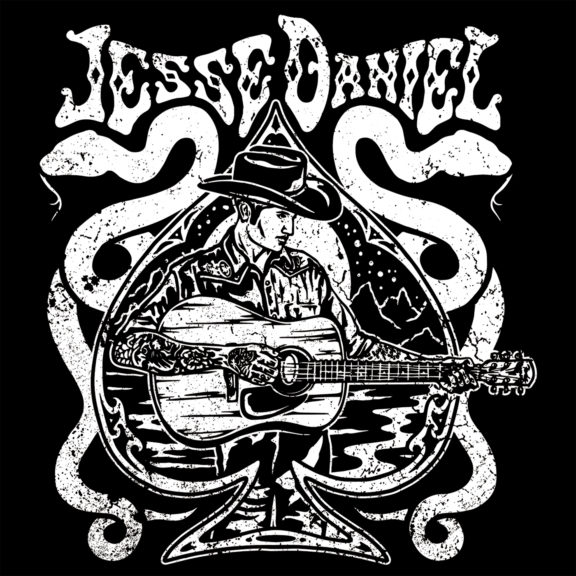 Drawing heavily on his past struggles and small town upbringing, Jesse Daniel’s self-titled debut album sounds both fresh and familiar from beginning to end. Pairing classic country styling with honest and compelling lyrics, Jesse’s album plays like an old favorite with a twist that is both edgy and uniquely his own. Jesse spoke to us about the new album, out May 26th, and all the factors that shaped his sounds and lead to its recording.

Zach Taylor:   First off I want to say this album is my favorite of the year so far. It instantly has a very fresh and stand out sound, yet also hearkens back to classic days of country. How did you become introduced to country music and who became some of your biggest influences?

I got introduced to country music mostly from a few sources. My neighbor was an older war vet who kind of took a lot of the neighborhood kids under his wing. He taught us blacksmithing and survival skills. He’d play Buck Owens and old Appalachian music from his records. The first time I ever heard “Act Naturally” was at his house and it stuck with me, I loved that song.

The other influence I had was from my father. He always played in bands growing up, so some of my earliest memories are of watching my dad play and sing in bars. He was always more of a blues and rock & roll guy, but there was a lot of country-rock & roll stuff that he liked and played around me. I think it kind of bridged the gap and helped me appreciate the combination of those genres. Guys like Buck Owens, Merle Haggard and George Jones are kind of my go-to’s, but I’d say one of my biggest influences would be Billy Joe Shaver. 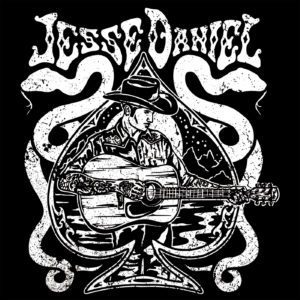 ZT: The instrumentals on the album are stellar, but the lyrics and their subject matter really set this album apart. You really invite the listener to take a look at your past. Was it difficult at first to bring up your past struggles or was it therapeutic in away?

JD: It definitely dredged up a lot of old feelings and heartache recording some of these songs on the record. A lot of the songs I’d written as a form of relief from whatever I was going through and some of them were really born from that pain. That being said, this album was incredibly therapeutic for me. All those songs have some old story or meaning tied to them, so it feels great to have gotten that stuff out in a constructive way. Now I get to share it with the world and hopefully make some folks happy. I’m real excited about the release.

ZT: While the album has a distinct outlaw feel, it also has a reoccurring theme of redemption. Does this record serve as landmark for you in regard to how far you’ve come from some of your darker times.

JD: I believe it does. For years I had all this creative energy, but no idea where to point it, so it ended up being misdirected. For all the years I wasted on drugs and in trouble, I felt the need to make up for lost time. Music was really what pulled me out of that life, so I just redirected my focus onto it and kind of used this album as a ladder out of all those chains. This record is a testament to doing the next right thing and doing what you believe you were meant to do.

ZT: Something I am curious about is your transition from playing in punk bands to now being a country artist. I’m interested in hearing what brought about that change for you. What was it about country that appealed to you or what elements do believe it has that punk lacks that you find fulfilling as an artist?

JD: To me, punk rock music was my first experience of rebellion. It was music that neither of my folks listed to and I had these guys that lived next door who were punks, The Czech brothers. I guess I had a lot of cool neighbors growing up!

They introduced me to all their favorite punk rock music and I just fell in love with it. It was energetic and fun, but also a good outlet for an angry young man like I was.

As I got older I started finding a lot of similarities between old country and punk rock music, mostly just in the way it made me feel. Time went on and I got a lot less angry, especially after getting sober and working on my self a lot. I’ll always have love for punk music, but country music is the music of my heart… it covers such a wide range of emotions.

ZT: Soft Spot (For the Hard Stuff) is one hell of a jam that instantly had many others and myself hooked. How did you come to the decision to release it as the first single and what was the initial response like after it came out?

JD: I was sitting in the studio with my partner, Jodi, listening to the backup vocals she just laid down on the song and we just kind of looked at each other and knew. People always like that song when we play it live, they remember it and request it. It hits home for a lot of folks too, so I thought it’d be a fitting first introduction to the record. The response was amazing. It was kind of a frenzy that day, but very confirming to hear so much positive feedback. Grateful to my fans!

ZT: Going back a little further, I know you have released some singles in the past. What were the driving factors behind the decision to write

and release a full album.

JD: Yeah man! Back in 2015 my best friend and producer, Henry Chadwick and I recorded an EP. It was my first shot at recording the country material I’d been writing and I look back on it fondly as my humble beginning. Henry and I always played in bands together and I love working with him, so I asked him to engineer and co-produce my full length album in 2017. Most of the songs on this album were just sitting there in my head, so I knew it was time to get them out into world. Henry did a great job nurturing that vision I had and I’m very proud of this record we made.

ZT: The album has strong elements of Americana both sonically and lyrically. Especially today with the emergence of more and more “pop country”, did you feel a certain responsibility to carry on tradition with this album? If so, is that a certain track that you think exemplifies that notion?

JD: Absolutely. I try to honor the music I love. At the same time, I always appreciate when people add their own style to what they’re doing. I aim to stay true to the way I would play a country song, as opposed to the “formula”, so to speak. “California Highway” would be that song for me.

ZT: With the release of the album comes a tour promoting it. You’re going from coast to coast over the course of two months. I know you have toured with other bands in the past, but have you ever done such an expansive tour? What does the preparation for a tour like this consist of for you?

JD: It’s coming right up! I can’t wait. I love touring, but I’ve never been on this big of a trip before. We’ve spent the last few months going over everything, getting the ducks in a row to leave. Constantly emailing venues and promoters, making sure our bus is in good shape, practicing, stocking up on vinyl, CD’s and merch for the road… the list goes on and on! It’s been a full time job, but I’m happy to give this album the push it deserves and bring it to the people who want it. Can’t wait to make new friends on the road!

ZT: Overall, what has the most exciting part of this process been? Any particular moments stand out, where you were like, “wow, this is really all happening”?

JD: When I got the test pressings back and listened to the record for the first time on vinyl, it hit me. With the record coming out and tour coming up quick, it definitely has become real… those dates aren’t just dates on a piece of paper now, they’re shows all over the country! Pretty wild.

ZT: Finally, just want to thank you for taking the time to talk about the album with us. Is there anything else you want current fans and new listeners to know about you or the album?

Thank you! I appreciate what you’re doing for artists like myself, it was my pleasure.

To all the fans and new listeners –

I can’t wait to meet you, play my music for you and share this album with you. USA, here we come!