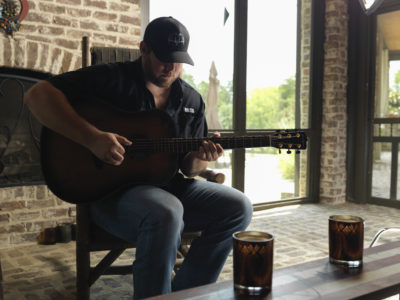 Inspiration for a song can come from one of many places.  Near the top of that list usually isn’t as a front row spectator for a funeral procession, but for acclaimed singer songwriter Matt Rogers, that’s exactly where “Richest Place On Earth” got it’s life from.  “I carried this songwriting idea around for over a year”, Matt tells us.  On his way back to Nashville from his home state of Georgia, Matt stopped to get gas and was stopped by the procession. “I pulled over and turned my emergency lights on. It’s a personal story of that struggle and split second of doubt, honestly. If there’s something you want more than anything, there’s only one choice. Pursue it with everything you’ve got.”

The video holds true to these exact themes Matt speaks of. Filmed entirely is his hometown of Eatonton Georgia using only volunteer actors; the scenes are crisp, rich and powerful. I found myself getting chills many times as the video forces those watching it to sit down and ask themselves if they’re doing everything with their life that they really wanted to. The lead actor in the video comes face to face with this reality in a scene near the end that will stop you in your tracks. Matt’s lyrics match the video with unflinching courage.

” I wanna live out and break the mold. Leave behind a story to be told. A life with no regrets, and not a penny to my name. When they lay me in the dirt, at the richest place on earth.”

A singer dedicated to his hometown and home state of Georgia, Matt has quite a big show tonight on the same day he premiers his video (May 4th 2018). The UGA Tifton campus is in for a real treat as Matt is opening for the legendary Clint Black!

“To open for Clint Black is something I never could have imagined. He’s what an artist like me strives for everyday, and getting to share the stage with him in Georgia, where I will see so many familiar faces in the crowd and people that have supported me from the beginning, it’s going to be on heck of a special night and experience for me.”

Matt also has a treat for everyone as he’ll be taking over our Instagram page today to give us a behind the scenes glimpse of his life and what getting ready to open for Clint Black looks like.  Be sure to turn on @RaisedRowdy post notifications so you don’t miss out!

We see big things happening for Matt in the future as his down to earth, honest music is sure to resonate with a lot of country music fans.

After the takeover keep up with Matt on all his social media outlets: