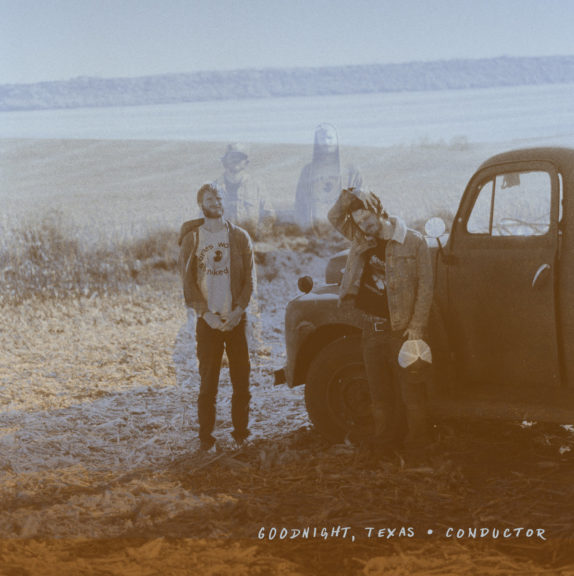 Google searches can be a finicky beast at times.  A tiny southwestern dot on a map and a folk, bluegrass group with members from opposite ends of the country will both show up when you search Goodnight,Texas.

The name derived from the midpoint of Avi and Patrick Dyer Wolf’s one time locales, the group has weathered tribulation and embraced new beginnings with the release of Conductor, a seemingly long four years since recording the critically acclaimed Uncle John Farquhar in 2014.

Conductor will perhaps sound a slight bit different than the last two LP’s as it’s a little more electronically amped up, but the roots GN,TX planted years ago continue to prop up a sturdy oak; it’s mandolin limbs and banjo leaves proudly on display for all to gaze at with wonderment.  More than just a title, Conductor guides it’s listener through multiple sounds and feelings as it meanders down the track pushing a beautifully blended mix of blues, folk, Americana bluegrass through an old set of rail car speakers.

We owe a debt of gratitude to Avi for taking time out of his schedule to answer our questions and add some backdrop to an LP we’re sure you will find yourself drawing many interpretations of.

The last 4 years since Uncle John Farquhar was released have seen a lot of ups and downs for the group, including pain as well as new beginnings.  How much of all that’s transpired made it into Conductor?
Damn near all of it in one way or another. It just affects the way you write. When you’re in those very focused moments of songwriting, it’s impossible to ignore those feelings and they end up coloring the way you make integral decisions for the song. There were many tough times but also positive moments where the sun came out and we had some much needed fun. It’s pretty easy to tell which songs those are. I’m really impressed at how this somehow turned into a scrapbook of the last four years of our lives and the world around us. We didn’t really set out to do that, but that’s what it became.
When did you start writing Conductor? Has it had a purpose or theme from the start, or do you draw inspiration from experiences as you go?
Many of these songs had been kicking around for a while. For example, Pat wrote Mona after a cross-country trip in his 1989 Buick LeSabre (named Mona) in 2009 when he moved from San Francisco to Chapel Hill. I wrote “Homesick” and “Barstow” for possible inclusion on Uncle John Farquhar, but we had too many songs! We actually recorded this version of “Homesick” in the Summer of 2015 at our friend’s Art Supply store (called The Artery) in Atascadero, CA. So it’s been around for a bit. But some songs, like “Keep Movin'”, were written and done all in a couple days much more recently. The theme itself definitely came together part way into that four year span – and then the whole process of picking which songs would make the album definitely got easier. We have plenty of extra material for future records.
To that end, what does the GNTX writing process look like?
Pat and I usually compose separately and then bring songs to a table. Usually each of us has an idea of what parts we want everyone else to play, but on this record we brought some slightly less complete ones and tried collaborating with each other and our bassist Scott Griffin Padden and drummer Alex Nash. That actually was pretty new for us, but it bred so much new sonic depth. Excited to follow this train where ever it goes.
Who has influenced your sound?  What artists are you listening now?
Hoo boy, ready for a list? We’ve been spinning Skyway Man from Nashville, Lisa Leblanc from Canada, Soccer Mommy, Phoebe Bridgers, John Moreland, Twain. Love Sam Amidon who adds this incredible etherial element to Appalachian music. Really dig ‘Prisoner’ by Ryan Adams. Fuzz (Ty Segall’s Sabbathy side project) is a mainstay, Ron Gallo, Susto, the new (and old) Caroline Rose. Loving the new Shakey Graves stuff I’m hearing. Patrick has a 1-and-a-half year old so he mentions Raffi. Also apparently Lisa Loeb makes incredible children’s music. As far as straight up influences go that list would be even longer. Dylan, Stones, The Band, The Beatles, Nebraska by Bruce. Lots of early country and blues, traditional music and western swing. I will say, we saw Shovels and Rope together at a tiny bar in Charlotte, NC called Snug Harbor in early 2012 and it had a big impact on us. We played their debut record (the one with “Gasoline”) in the van for like two years straight.
What do you hope the future for GNTX holds?
Something as brilliant as the concept behind Vulfpeck’s Sleepify album. Maybe a flying van. Definitely more songs. A thrash metal phase. Plenty of sleep. And that we keep having a good time.