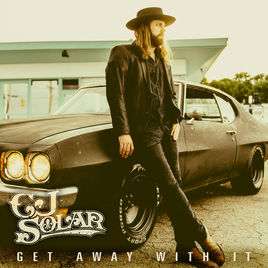 CJ Solar the country music artist is exactly what you’d expect. With long hair, long beard, round brim cowboy hat and an old-school kind of style, he gives off a certain vibe. With that vibe comes an expectation of guitar-slashing yet soulful country music, and Solar’s voice does not disappoint.

Born and raised in Baton Rouge, Louisiana, Solar grew up listening to a number of different musical styles. The blend of jazz, southern rock, zydeco and the likes all played a part in his musical life. Lucky for us, Solar found his niche — or his groove, if you will — with his latest EP “Get Away With It”. Pre-order it here.

Debut single “Airplane” is garnering national radio play, and is charting on Music Row and Billboard charts. The 5-song disc, though, is chalked full of hits.

Starting with an anthem to “American Girls”, Solar immediately draws in listeners with reference to Tom Petty and “Roll Tide”, two of the South’s most famous words. Despite saying how good the girls look in a truck, you don’t get the feeling of objectivity or typical country song lyrics because the song essentially references the entire spectrum of the types of women we love here in the Good Ol’ U.S.A. (Sidebar: This song also references giving Uncle Sam a ‘high-five’, which is nothing short of an awesome idea!)

Keeping with a similar theme, Track 2 “Same Town” is interesting in that it’s true. When you really think about it, most every small southern town is the same. Football Friday nights, parties in a hay field, etc., just as the chorus belts, “Whether you’re in a different state or two miles away/You know what I’m talkin’ about/We’re all from the same town.” I fully expect this song to be popular during the fall during high school football games, no doubt.

The EP includes both single releases “Airplane” and “Hell No”. Solar penned the latter with his songwriting legend Bob Depiero. Solar said it is one of his favorite songs he’s ever written.

CJ sat down with us to talk about his background, songwriting and the EP. You can catch an exclusive acoustic performance of “American Girls” as well.