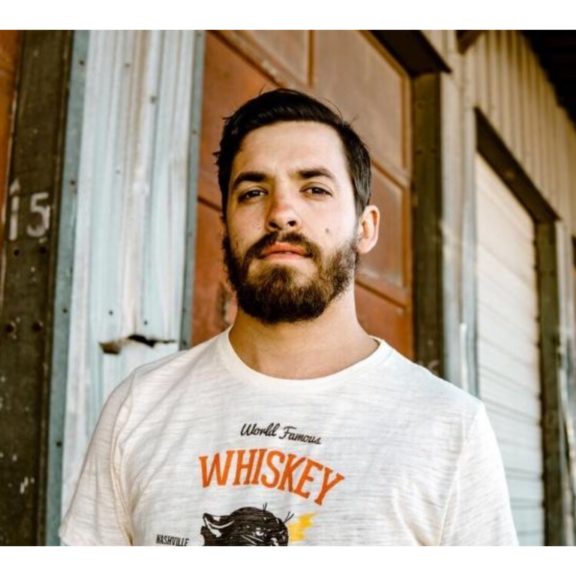 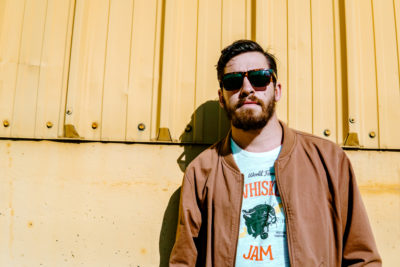 Listen to the first strike of the drum; see the first pan of the room, and you can feel the moment into which Ryan Nelson gives us a view. We sat down with Ryan to pick his brain about the new video and give you a behind the curtain look with our exclusive premiere of “Everything and Nothing / Breakin’ In Leather”

Ryan explains his vision for this two song live recording like this: “I really love the feeling that live recording captures. I don’t typically record things 100 percent live when I’m cutting singles or album cuts, but when I’m having it filmed, I want there to be no doubt that we are playing everything 100 percent live – just the way you’re seeing it. No overdubs. No extensive editing.”

Authentic is the best word we can use to describe this project. The little things one might pick up on in this video really stand out to me. The frays on Ryan’s camo guitar strap, the empty PBR cans on the ledge behind the boys and Dobro Chris in his camo overalls. This is who these guys are – no gimmicks, no games – just real music.

Ryan says the idea for this project comes from his love for a similarly-styled project by Sturgill Simpson. Once discovered, he had Sturgill’s “You Can Have the Crown / Some Days” video on repeat for a long time.

“When I first saw it, and I saw that transition they did to merge those two songs, I lost my shit,” he said. “I hadn’t been more inspired by something in a while, so when it came time to do the video I really wanted to try it out.”

Trace Horse studios was chosen at the recommendation of his friend Eley Buck Davis who recorded a video at the studio previously. Once explaining the vision to the guys at the studio they were on board with the project.

Speaking of the room, let’s talk about who Ryan chose to surround himself with. These people all mean so much to him. The guys in the video are: Spenser Ward on Drums, Dobro Chris on the steel/harmonica and Dalton Stanley on guitar – all of whom are from Ryan’s hometown of Jacksonville, FL and have moved to Nashville to pursue a life of music. Finally, there is Ryan’s friend Aaron Thompson on bass who he describes as “a freak”.

These guys are not just some session players making a few bucks for their talents. No, these are people whose roots hit ground right next to Ryan’s. They are as much a part of who Ryan Nelson is as his music and songs. He has been playing with Spenser and Chris in particular for 10-plus years. So he knew if he was going to make this type of project work, with so many things that could go wrong, it had to be with these guys. 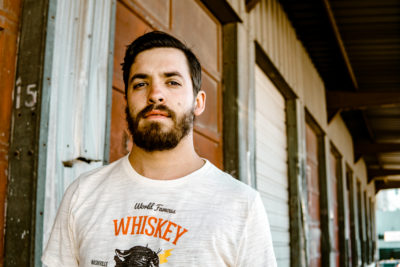 “Everything and Nothing” (written with Jessie Brown) is a particularly special one for Ryan. Let’s start with when this track was written. The music community – specifically the country music community – had just been hit hard with loss.

It seems everyone in America had been drastically affected but he Highway 91 Harvest Festival massacre. Not only had that just taken place, but the passing of Florida-grown icon, Tom Petty the very next day hit Ryan particularly hard, amidst all of the shock and sadness. This write came directly on the heels of those events.  With that suffering and sorrow still close in minds and hearts of everyone in the community, this song took its shape.

Ryan and Jessie, who are good friends, started the write with about a 30 minute discussion of the events that had just taken place and even contemplated not writing that day. Then the inspiration came. Ryan wanted to write, “Something that Tom Petty would listen to and be proud to know he had influenced.”

In the world that seemed so dark, came a song that exalts the ideas of not being afraid to live your life. It pushes the message of trying new things, even if they are scary.  You might fail, but you cannot live in the shadow or worry forever. Writing this song was their therapy that day, like listening to it and other songs like it is for so many of us. Powerful. Forward moving. Thoughtful. That is what “Everything or Nothing” is.

Now we get to the other side of the video with, “Breakin’ In Leather” (Written with Ray Fulcher and Chad R. Bishop)

Ryan remembers it all starting with he, Ray, and Chad hanging together at the Tin Roof Revival. The other guys had already put the write together, and invited Ryan in on it. The initial conceptual idea for the song did not end up being how this track was written. The initial idea was for a boy growing up and breaking in a leather glove playing catch then later breaking in a new pair of boots and lastly breaking in the backseat of the car with his prom date. That third idea kind of switched the gears on the song and that is how they landed on the current, racier version of “Breakin’ In Leather” you are listening to today. Ryan knew he wanted to cut this song once they finished it. It is almost in the same tone as Kip Moore’s “Backseat” and is really dynamic in a live set.

We think this project is a really cool look into the inner working of a studio. It really gives you a feel of the players in the room and who Ryan is as an artist.  We could not be happier to premiere this for you guys and we can’t thank Ryan enough for working with us to do so. SO without further ado…

We have a really special prize to give away for you all too.

Ryan has given us original, hand-written lyric sheets signed by all the songwriters as well as a headshot from his most recent photo shoot.

There are three ways to enter and you can do each item once for a total of 3 entries!

For each of these to count you music follow/like Ryan Nelson and Raised Rowdy on that platform. 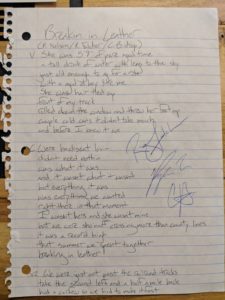 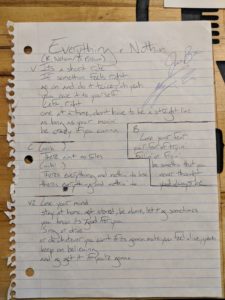 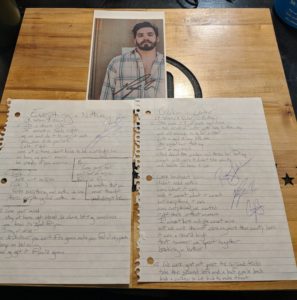 We will total up all the entries next Friday (April 13th at high noon) and send out these one-of-a-kind items to the winner of the raffle.  Not only do you get a chance to win, but you are sharing a fantastic up and coming artist with your friends and family!