AJ’s Good Time Bar Lives Up To Its Name 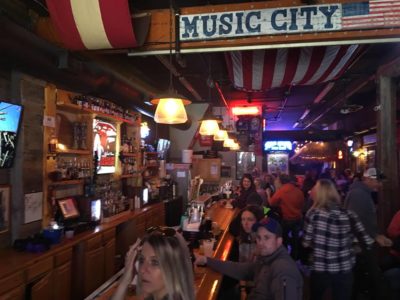 Stepping into AJ’s Good Time Bar on Lower Broadway in Nashville is almost like stepping back in time to the 1990s. With photos of country music legends surrounding the stage and a framed set of clothes from Alan Jackson’s “Good Time” album cover greet you when you walk inside.

A small dance floor in front of the stage is usually filled with folks showing off the western swing moves or maybe just a good ol’ slow dance to a Conway Twitty song.

There are three floors filled with fun and a rooftop bar, giving patrons a spectacular view of the downtown Nashville scene. On the first floor, on most days before 6 p.m. you can find the incredible March Bartender of the Month Merritt Hawkins behind the bar. She’s slingin’ drinks for everyone while old-school country music gets the boots moving.

Just up the stairs is the where sports fans can check out any games being played. They have close to 10 TVs on the floor with sports or live feeds of the other floors playing at all times. While you’re watching the game, though, you can find some of Nashville’s best talents pickin’ and grinnin’ with their acoustic guitars singing you some of the country music’s biggest hits from over the years. If you’re lucky and find Mark Box or Lucas Barella on the floor, make sure you stop in for a drink to hear those guys.

The third floor doesn’t normally open until 7 p.m. and 90 percent of the time there will be karaoke going on. There are no rules on songs sang for karaoke, so if you want to keep the theme and rock it country style or mix it up with some Vanilla Ice – it’s all good. 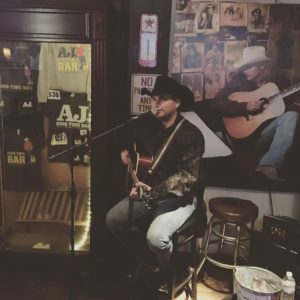 If you’re looking for a meal, AJs isn’t your best bet. If you’re looking for a quick snack between two-steps, they’ve got you covered. A full bar, stocked with local draughts and the best liquor around, will be sure to satisfy your thirst. Have a pizza or some nachos while you’re day-drinking to keep the party going.

The music, however, is what really sets the mood. Alan Jackson doesn’t allow any non-traditional style country music to be played inside the Good Time Bar & Grill, so if you’re a fan of Waylon Jennings, John Michael Montgomery, Lorrie Morgan and Keith Whitley – you’re going to have a really good time.

They kick off music around 1 p.m. on weekdays with a full band on the first floor, but that’s only the first layer to this honky tonk onion.

Make sure you are ready to tap your boots and swing around the dance floor if you take on AJ’s Good Time bar because there’s a reason it’s named such.

Go to the second floor and listen to those guys singing with an acoustic guitar. Don’t just listen; engage in conversation with them. They’re good people who are here to make a living selling songs. You’ll enjoy their company and they’ll sure enjoy yours. 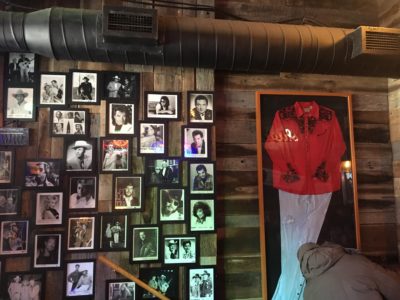 […] version) and her current life on the strips of Lower Broadway in Nashville. You can find her at AJ’s Good Time Bar & Grill typically during the daytime […]